Molly is undeniably the most insufferable character on Insecure this latest season, but her style has been quite literally, flames. The on-screen style in Insecure has been hotly debated since its premiere in 2016- initially helmed by costume designer Ayanna J Kimani and now by Shiona Turini, since the previous season, both designers are black. The shape has managed to keep the style true to each individual character with a core focus on accessible, elevated clothing. Both designers homes in on a black aesthetic with their choice of costumes and styling.

For the latest season, Shiona Turini took things up a notch, arguably most of all with Yvonne Orji’s character Molly Carter – we see an evolution in Molly’s style this season, reflecting growth in her career and *yess girl* her coins! We love that Insecure casts a lot of Universal themes and situation despite featuring an African-American cast, it’s even mirrored in the wardrobe choices of the cast from Dion Lee to Fendi to Lisa Folawiyo and Jacquemus.

Check out Molly’s best look from season 4 so far.

Molly in a Meshki bustier and Margiela cut out jeans. 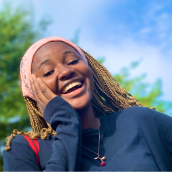